This is a remarkable and heart wrenching story from the Wyoming Star-Tribune. 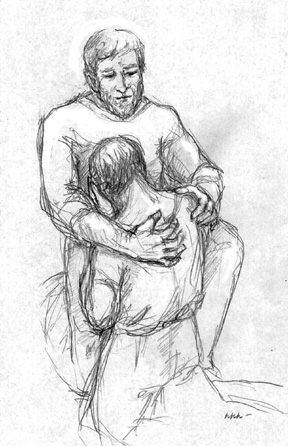 H/T Get Religion. In September of 2005 three seminarians , studying for the priesthood, go out for a few drinks.  Tragically, they all get into a car to go back to their dorm.  There is an accident. Only the driver,Rob, survives.

Rob pleads guilty to a felony. He faces ten years in prison. But the mothers of the dead men, ask the court for leniency:

“It’s Pam’s turn next. “People ask me how I feel about losing my son and how I must hate the guy that was driving. I do not hate ‘the guy’ — he has a name — who was driving,” she reads from her victim’s impact statement.

She pauses, collects herself, begins again.

Hate is a terrible word. Hate is like a cancer that eats away at your heart and soul and makes you a bitter person …”

Matty would forgive, she tells the court. If Rob Spaulding still wants to be a priest, she hopes he will be allowed to do it.”

Today, Rob, is a priest. Because two mothers offered forgiveness and reconciliation. Rob was redeemed.

You really should read the whole article.

What really struck me was that, for the parents of the dead seminarians, forgiveness was not a conscious decision. It was not an act of the will. They just forgave. Period.

“In April 2006, Rob and his parents drove to Kansas. He met with Rick Cheek, Jared’s father, Joan and then Pam. I am so, so sorry, he said to each one.

He didn’t expect forgiveness then, didn’t ask for it.

But they all gave it.

What they did transcends forgiveness, Rob said. It crosses over into redemption and reconciliation — standing eyelash to eyelash with the man who killed their sons and then inviting him to become part of their lives.”

Wow. Real Christian love in action. I have seen that kind of faith, love and grace at least once. My cousin’s 12 year old daughter was hit by a car and died.  At some point during or just after the funeral (I can’t remember), my cousin and her husband learned that the woman who was driving the car was so distraught that she couldn’t get out of bed. They immediately went to see the woman to offer their forgiveness.

These parents were drenched in grief. Standing upright took an act of the will. Yet they could summon the faith, the love, the energy to reach out to the woman who had killed their daughter.

But forgiveness can often be difficult. I didn’t realize how difficult forgiveness can be for most of my life. While I can have a fiery temper (hey I used to have a lot of red in my hair), the fire was usually extinguished quickly.  I quickly forgot what I had been angry about.

But then I was in a situation for four long years that taught me how difficult forgiveness can be. I was trapped with people who were absolutely cruel. If  their malice had been directed only to me, I might not have felt so strongly.But it was also directed at my husband.

It was four long years of willing myself not to hate. I am ashamed to say that I was not always successful. Whenever we  traveled to meet these people, I would get physically ill as we approached our destination.

There is a reason that God had to make loving our enemies a commandment.

When our association with the group finally ended, I still could not forgive. I would avoid speaking to them at all cost.

I knew that I had to forgive. But I realized that I would need God’s help. God’s grace. It took two years of praying. Two years of turning it over to God. It was a slow process.

But then I found myself spending a weekend with this group. And I realized that the struggle was over. I was able to converse politely with my enemies. I was at peace.

God had healed me.

There was a religious talk show on the radio. One of the hosts said that failing to forgive is like a person who has a rat in his house taking rat poison himself, instead of giving it to the rat, and then waiting for the rat to die.

My feelings for my “enemies” were poisoning my soul.

The mother in the above story knew instinctively what took me years to figure out:

“Hate is a terrible word. Hate is like a cancer that eats away at your heart and soul and makes you a bitter person …”

I am the wife of a Catholic deacon living in Des Moines Iowa. My husband Larry was ordained in 2006. We have two children and five grandchildren.. Our daughter and her family live in Ireland, and our son and his family live in Franklin Massachusetts.
View all posts by Susan Kehoe →
This entry was posted in Discipleship, Forgiveness and tagged Christian living, drunk driving, forgiveness, hate, love, Mundelein, Priests, redemption, Seminarians. Bookmark the permalink.