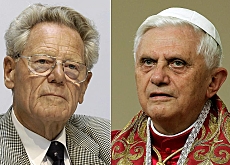 drew me back to Christ.

Samuel Gregg, of  the Acton Institute compares and contrasts recent books by the two German scholars.

After Vatican II, Ratzinger and Kung took very divergent roads. Ratzinger emerged as a formidable defender of Catholic orthodoxy and was eventually elected pope. Kung became a theological celebrity and antagonist of the papacy.

Now both men are in the evening of their earthly days. What, many wonder, occupies their minds at this time of life? In this regard, Jesus of Nazareth and Can the Church still be saved? are quite revealing.

From Jesus of Nazareth’s first pages, it’s clear Benedict is focused upon knowing the truth about Christ as He is rather than who we might prefer Him to be.

Through a deep exposition of Scripture many Evangelicals will admire and a careful exploration of tradition the Eastern Orthodox will appreciate, Benedict shows Christ is who the ancient Church proclaims Him to be – not a political activist, but rather the Messiah who really lived, really died and who then proved his divinity by really rising from the dead.

So what is Kung’s book focused upon? In a word, power. For Kung, it’s all about power – especially papal power – and the need for lay Catholics to seize power if the Church is to be “saved” from sinister Roman reactionaries who have perverted Christianity for centuries.

Leaving aside its cartoon-like presentation of Church history, the Christ of Kung’s book is one who would apparently disavow his own teachings on subjects such as marriage because they don’t conform to twenty-first century secularist morality. Instead, Kung’s Christ faithfully follows the views of, well, progressive post-Vatican II German theologians.

For long-term Kung-watchers, this is nothing new. He’s been playing the same broken record since 1965. And the worn-out tune is that of accommodation: more precisely, accommodation to secularist-progressivism.

Unfortunately for Kung, he has two problems. One is theological. No matter how much scandal has been caused by Borgia popes, inept bishops, heretical theologians, sexually-predatory clergy or sinful laity, the Catholic Church teaches “the gates of hell will never prevail against it.”

In short, the cosmological battle has already been won. Hence the Church isn’t anyone’s to be “saved.” Yes, all Catholics and other Christians continue to sin, but the Church’s survival has been guaranteed by Christ. In that light, the notion the Church needs to be “saved” by late middle-aged dissenting baby-boomers is more than absurd: it’s also arrogant.

Kung’s agenda also has a practical problem. Put simply, it’s failed. Whether it is interpreting Vatican II as a rupture with the past or banalizing the liturgy with clown masses and 1970s music, no-one can plausibly claim the accommodationist project infused life into Catholicism.

Instead, it produced ashes. In much of the West, it facilitated moral relativism, a bureaucratization of church organizations, and the collapse of once-great religious orders into not-especially coherent apologists for name-your-latest-lefty-cause.

In what’s left of accommodationist circles, woe betide anyone who highlights the dark side of the Greens’ agenda, who suggests the Intergovernmental Panel on Climate Change doesn’t share in the charisma of infallibility, or who observes that the small number of non-negotiables for Catholics in political life actually are non-negotiable. To do so is anathema.

Benedict’s vision of the Church is utterly different. It does not indulge the fantasy that a “new church” somehow materialized in 1965. Nor does it hanker after an imaginary 1950s golden age.

Instead it’s a Church focused upon deepening its knowledge of, faithfulness to, and love for Christ. It’s also a Church that engages the world, but is not subservient to passing intellectual-fashion. Finally, it’s a Church which is evangelical in the best sense of the word: proposing – rather than hedging or imposing – the Truth revealed by Christ.

But perhaps the most revealing difference between Benedict and Fr. Kung’s books is the tone. Can the Church still be saved? is characterized by anger – the fury of an enfant terrible who’s not-so-enfant anymore and who knows the game is up: that his vision of Catholicism can’t be saved from the irredeemable irrelevance into which it has sunk.

Jesus of Nazareth, however, is pervaded by humility: the humility of one who approaches human history’s greatest mystery, applies to it his full intellect, and then presents his contribution for others’ assessment.  Read more here.

I am the wife of a Catholic deacon living in Des Moines Iowa. My husband Larry was ordained in 2006. We have two children and five grandchildren.. Our daughter and her family live in Ireland, and our son and his family live in Franklin Massachusetts.
View all posts by Susan Kehoe →
This entry was posted in Catholic Church, Pope Benedict XVI and tagged Catholic teaching, Fr. Kung, Pope Benedict. Bookmark the permalink.