Do As I say. Not as I have Done

Our daughter, who lives in Ireland with her family, called me yesterday. The 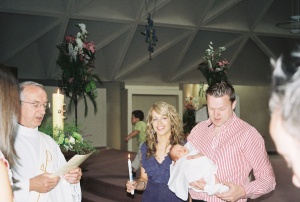 economy is very bad in Ireland.  She is a stay at home Mom, and her husband has his own business (electrical and mechanical engineering design). He went in to business before the bubble burst.

She is worried. I feel so helpless. I wish that we had the means to help her, but God has never trusted me with money.

It is so hard to be the parent of adult children. I have never gotten the hang of it. My eldest turns 37 this year, so I guess that I am a slow learner. Perhaps it is because of the distance involved. Both of my children live across the pond; my son and his family live in Scotland.

So what does this have to do with “all things Catholic”? Well my daughter mentioned that they might consider taking a job outside of the country, in the Middle East. I wanted to say don’t. Much of the Middle East is not women friendly at least not by western standards.  But that is not the reason. My daughter comes from a long line of strong assertive women. Heck It takes loving but very strong men to handle us.  So I know that she can handle anything short of harm coming to her children.

But I didn’t say anything really. Deacon and I really don’t have any credibility. As my daughter once said,

“I grew up and my parents left home”.

She is right. The kids were in college and things were getting rough in Ireland. My husband, after working for sixteen years in the US, never really adjusted to returning home.  Thomas Wolfe was right, you can’t go home.

My children were in college, and they had already met their true loves. So back we came to the United States.  We certainly didn’t cast down our buckets. I know the allure of an imagined bright future somewhere else.

My daughter is living in a place where her husband has roots. He was born and raised near where they are living. His parents are only five minutes away. She has lived there since she was 14. That is a record for our family!

Talk about a white picket fence! The one thing that has made living so far away from my children bearable  is that they are both happily married to wonderful people. They both have been loved and embraced by their spouses’ family. I know that they have the support that my husband and I can’t give them. I know that my grandchildren have grandparents that are part of their lives. It is such a comfort to know that.

Okay. I admit it. It sometimes makes me feel just a wee bit jealous. I never said that I was a saint. They won’t be erecting any statues with my name on it.

Anyway, I pray that they can find a way to cast down their bucket where they are. But God may have different plans. The Father does know best.

I am the wife of a Catholic deacon living in Des Moines Iowa. My husband Larry was ordained in 2006. We have two children and five grandchildren.. Our daughter and her family live in Ireland, and our son and his family live in Franklin Massachusetts.
View all posts by Susan Kehoe →
This entry was posted in Family, Theology of Staying, Uncategorized and tagged daughters, family, Theology of Staying. Bookmark the permalink.

1 Response to Do As I say. Not as I have Done