Saint of The Day: Memorial of St. Francis Xavier 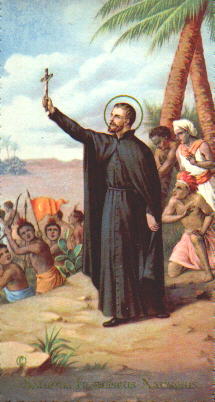 met St. Ignatius Loyola and with whom he received Holy Orders in Venice in 1537. In 1540 he was sent to evangelize India. He labored in western India, the island of Ceylon, Malacca, Molucca Islands, island of Mindanao (Philippines), and Japan. In 1552 he started on a voyage to China but died on Sancian Island.

From today’s Office or Readings an excerpt from St. Fracis Xavier’s letter to St. Ignatious of Loyola, The Duty to Evangelize.

I am the wife of a Catholic deacon living in Des Moines Iowa. My husband Larry was ordained in 2006. We have two children and five grandchildren.. Our daughter and her family live in Ireland, and our son and his family live in Franklin Massachusetts.
View all posts by Susan Kehoe →
This entry was posted in Saints. Bookmark the permalink.