Saint of the Day: Athanasius

St. Athanasius, Bishop of Alexandria and a great defender of 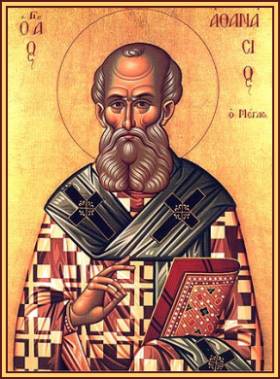 the orthodox faith, throughout his life opposed the Arian heresy. By denying the Godhead of the Word the Arians turned Christ into a mere man, only higher in grace than others in the eyes of God. St. Athanasius took part in the Council of Nicea in 325 and until the end remained a champion of the faith as it was defined by the Council. In him the Church venerates one of her great Doctors. He was subjected to persecutions for upholding the true teaching concerning the person of Christ and was sent into exile from his see no less than five times. He died at Alexandria in 373 after an episcopate of forty-six years. Read more here.

Marcellino D’Ambrosio has a selection of the Saint’s writings (scroll down).

Ignatius Inside Scoop has more on St. Athanasius here.

I am the wife of a Catholic deacon living in Des Moines Iowa. My husband Larry was ordained in 2006. We have two children and five grandchildren.. Our daughter and her family live in Ireland, and our son and his family live in Franklin Massachusetts.
View all posts by Susan Kehoe →
This entry was posted in Catholic, Saints and tagged Council of Nicea, Doctor of the Church, St. Athanasius. Bookmark the permalink.

1 Response to Saint of the Day: Athanasius