More on the Bishops vs Obama

Our Bishop is awesome. From today’s Des Moines Register: 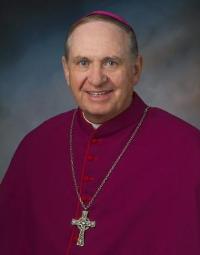 “President Barack Obama’s abrupt policy shift aimed at defusing a national uproar over birth control didn’t go far enough for Des Moines Catholic Bishop Richard Pates, who has penned a letter he wants read from the pulpit or printed in the bulletins of 81 parishes Sunday in protest of the administration’s plan.

The Obama administration issued a declaration on Jan. 20 that religious institutions, such as Catholic hospitals and universities, would be required to offer free birth control to employees as a health care benefit.

The president on Friday announced that while workers at such institutions must still be offered free contraception, the insurance companies, not the religious employers, would pick up the tab for such services — a solution he said will protect religious liberty while also ensuring women have access to free contraception.

But such a requirement remains unacceptable to Pates, whose Des Moines diocese includes about 97,000 Roman Catholic parishioners.

“The government can’t be about engineering who we are and what we are going to believe,” said Pates, who was recently elected chairman of the United States Conference of Catholic Bishops’ office for International Peace and Justice, which, among other things, works to promote religious liberty around the globe. “We need to take this out of the political sphere. This is a human rights issue that is not intended to be politically aligned one way or the other.”

Similar responses have been issued by the bishops presiding over Iowa’s three other dioceses since the Obama administration’s initial decision to offer no conscience exemptions for the health care services offered to employees of church-affiliated institutions.

The U.S. Conference of Bishops is withholding its endorsement of the change until it sees the details.

Bishop Pates’ letter to be read on Sunday states that such a policy is “immoral and thus we cannot use our resources to make (it) possible.”

Msgr. Frank Bognanno of Christ the King parish on Des Moines’ south side earned multiple ovations when preaching against the mandate at mass last Sunday.

“I was really surprised the government would try to force any church to act against their conscience,” Bognanno said. “This is a very arrogant and bold step for any government to take. This is intolerance.”

Msgr. Bognanno is ( proud to say)  our pastor; I hope that his homily was recorded since we were in Ireland last weekend.

I am the wife of a Catholic deacon living in Des Moines Iowa. My husband Larry was ordained in 2006. We have two children and five grandchildren.. Our daughter and her family live in Ireland, and our son and his family live in Franklin Massachusetts.
View all posts by Susan Kehoe →
This entry was posted in Bishop Pates, Catholic Church, Church and the Public Square and tagged Obama Contraception Mandate. Bookmark the permalink.