The Sons of Caesar, Still Pulling Peter Down

Elizabeth Scalia (AKA The Anchoress) has an excellent article over at First Things. It 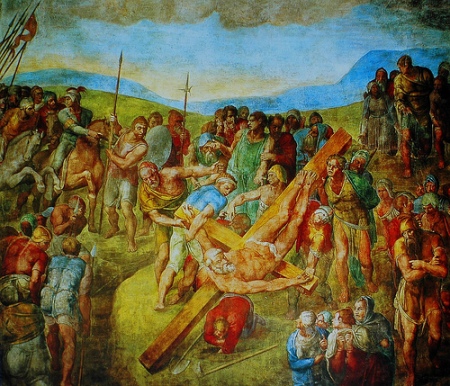 is a good explanation of why those of us who struggle to be in the world but not of the world make those who embrace the world so darn uncomfortable.

“The sons and daughters of Caesar have always found the church to be disorienting: It does not perform the expected oblations at their printing presses and editorial boards; it does not acquiesce to tantrums or feet-stamping; it does not recognize the celestial language of people so highly credentialed by earthly entities that they feel empowered to birth prophetic new modalities of being.

The Church cannot recognize everything that is humanly ordained because it has been divinely ordained. Its charge is not to simply echo the zeitgeist but to deliver us from it; to free us from the rigid rootedness of “right now,” where ideas become bronzed and erected and proclaimed as the new eternal rightness, until they are tumbled and replaced by the next generation claiming its idolatrous moment.

The sins of the church, vast in number though they are, are of human origin. The humans within the church, from Peter to your lowly correspondent, have always wrestled with the shadowy mysteries of human brokenness. As Hillaire Belloc said, the church’s divine origins are proved by its continued existence, for “no merely human institution run with such knavish imbecility would have lasted a fortnight.”

The world and its children of Caesar disdain all knavish imbecilities except for their own; aware that human constructs do not last, they hastily deliver up their ideas in sterile, insulated environments and then quickly encase them into law books, which bear the name Authority. But in Peter they find a creature whose authority is other-originated—conferred upon a hapless fellow in the midst of a hot mess—and whose organization codified itself through slow, painfully thorough reasoning augmented by martyrdom. Her teachers are still tantalizing students with subversive notions, still turning the worldly world, in all its glamour, in all its empty promises, on its head.

Which is why the world, again and again, tries to turn Peter on to his.  Read more….

I am the wife of a Catholic deacon living in Des Moines Iowa. My husband Larry was ordained in 2006. We have two children and five grandchildren.. Our daughter and her family live in Ireland, and our son and his family live in Franklin Massachusetts.
View all posts by Susan Kehoe →
This entry was posted in Uncategorized. Bookmark the permalink.