The Church and the Public Square

A young woman asked me a question, during a fundamentals of the faith class that I 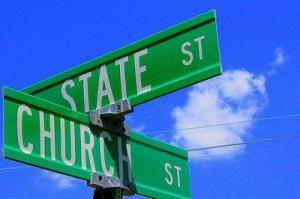 offer , called Roots of Faith, She asked, “why does the Church get involved in political issues: what about the separation of Church and state”?   While I could argue that the Constitution contains no such separation, I decided to tackle the question from a purely Christian perspective.

It is especially important that the Church defend the inherent dignity of the human person, from conception until natural death in the public square. When the dignity and life of the human person is under attack from abortion, euthanasia, torture, and racism for example, the Church has a duty to speak out. When society does not promote the well being of all people, then it is the duty of the Church to speak for the weak, defenseless, and marginalized.

That is why the Church spoke out with a strong voice in opposition to some parts of the health care legislation. That is why some Bishops have denied the Eucharist to some Catholic politicians who have spoken publicly in favor of abortion.  It is not a political issue. Catholics who hold public office, declare themselves to be “devout” Catholics, and speak out against the moral teachings of the Church (when non negotiable) cause grave scandal to the faithful. They are not in communion with the Body of Christ. That said, Bishops who do not want to sanction such politicians have a legitimate position.

We are called to live our faith every minute of every day.  It is against the mandate of Jesus, who called us to “make disciples of all nations”, to leave our faith in the pews.  In Faithful Citizenship, the Bishops stated:

The Church’s obligation to participate in shaping the moral character of society is a requirement of our faith. It is a basic part of the mission we have received from Jesus Christ, who offers a vision of life revealed to us in Sacred Scripture and Tradition.

It doesn’t really matter, therefore, if there is a separation of Church and State. As Christians we are called to live in the world, but we are not to be conformed to the world.

The Church’s obligation to participate in shaping the moral character of society is a requirement of our faith. It is a basic part of the mission we have received from Jesus Christ, who offers a vision of life revealed to us in Sacred Scripture and Tradition. To echo the teaching of the Second Vatican Council: Christ, the Word made flesh, in showing us the Father’s love, also shows us what it truly means to be human (see Gaudium et Spes, no. 22). Christ’s love for us lets us see our human dignity in full clarity and compels us to love our neighbors as he has loved us. Christ, the Teacher, shows us what is true and good, that is, what is in accord with our human nature as free, intelligent beings created in God’s image and likeness and endowed by the Creator with dignity and rights. (Faithful Citizenship).

I am the wife of a Catholic deacon living in Des Moines Iowa. My husband Larry was ordained in 2006. We have two children and five grandchildren.. Our daughter and her family live in Ireland, and our son and his family live in Franklin Massachusetts.
View all posts by Susan Kehoe →
This entry was posted in Catholic, Christianity, Culture Wars, Politics and tagged Catholic, Church and State, Politics, Public Square. Bookmark the permalink.