Cast Down Your Bucket: A Theology of Staying

Booker T Washington was a former slave who rose to prominence after the Civil War. In 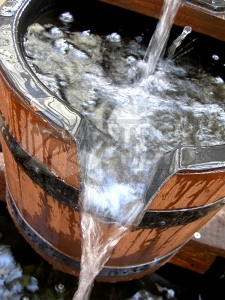 1895 he gave a speech known as the “Atlanta Compromise Speech”. It is considered one of the most important speeches in American history. The speech contained the following story:

In the speech he was urging southern black people to work with their white neighbors instead of looking to the north for assistance. He said, “Cast down your bucket where you are. Cast it down, making friends in every manly way of the people of all races, by whom you are surrounded. ”

You may be wondering what this has to do with a Theology of Staying. As an armchair theologian, I have been mulling over the idea that a nomadic very American type of lifestyle might have an adverse effect on spiritual growth.

First, let me share with you a little of my background. My husband and I have lived in Des Moines Iowa for nearly thirteen years. In the same city. In the same house.  To some people this is not startling news—especially in Iowa. But this is the longest I have ever lived in one place my entire life.

While my husband grew up on a family farm, in Ireland, that has been in the family for over a hundred years, this is the longest that he has lived in one place for the (almost) thirty-seven years that we have been married.

Ironic.  Growing up I always swore that I would live in one place in an old house with a white picket fence. Maybe the nursing home will have a white fence.

There are many good things about moving to other places: exposure to a variety of people, cultures and places; learning to adapt to different situations.  There is also the perk of leaving a house before it is time to paint or replace the carpet.

My parents would prepare my brother and me for a move by telling us that it was a chance to start over with a clean slate. (Dad, Mom I am not complaining. It was a good thing to do).  In many ways moving was great. Who doesn’t want, at least once in a while, to have the chance to reinvent herself?  I came to love that clean slate.

But I am beginning to question, now that I seem to be planted where I am for the foreseeable future, if there are negative aspects of moving so much.

I haven’t had to cast down my bucket to find solutions to problems.

Specifically until recently, I haven’t had to deal with relationship problems. This has led to a difficulty in forming lasting attachments to people. There never was a chance to develop loyalties to a place or people. I always knew that I would be moving. We do have old friends, but it is only because they have done all the work.

Recently a misunderstanding occurred with a good friend, and I do not have the experience to deal with it.

The same is true for my husband. If things weren’t going the way he wanted to at work; well he could always find a better job in a better place. There was no incentive to work things out or to assess what the problem was. He has now worked for the same company for over seven years (a record), and he had to learn how to work things out instead of leave.

In order to love, we have to cultivate compassion. To have compassion means to suffer with. It means understanding that most people are broken. When people treat us badly, there is often something going on in their lives. There is so much pain out there.

When you are a nomad, with no sense of place or loyalty or history, it is easy to write people off. It is easier to avoid doing the hard prayerful work of forgiving others including our enemies. There is a good chance I will never encounter my enemy again.

But most of all I have learned to give people the benefit of the doubt.

All sin is the failure to love. We are all called to holiness of life, “be perfect as your father in heaven is perfect (Matthew 5).

This means we are called to purity of heart. Only the pure of heart will see God face to face. One of the things this requires is to see others as icons of  Christ, as icons of divine beauty.  I am beginning to think that this means really getting to know others. This requires hanging around for a while.

So unless God has other plans, I think that I will cast down my bucket where I am.

I am the wife of a Catholic deacon living in Des Moines Iowa. My husband Larry was ordained in 2006. We have two children and five grandchildren.. Our daughter and her family live in Ireland, and our son and his family live in Franklin Massachusetts.
View all posts by Susan Kehoe →
This entry was posted in Catholic, Christianity, Holiness, Theology, Theology of Staying, Uncategorized, Virtue and tagged Cast down your bucket, Christian, growing up, lifestyle, love, nomad, theology. Bookmark the permalink.

7 Responses to Cast Down Your Bucket: A Theology of Staying