Pope Benedict has spoken often about the dangers of relativism. Relativism is the 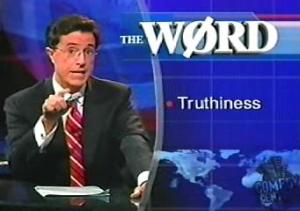 belief that there is no such thing as settled truth, settled doctrine, or objective morality. Everyone is right. But if all beliefs are equally true, doesn’t it also follow that all are equally not valid? At the very least nothing has any meaning or any worth.

Relativism is simply not compatible with the Catholic faith.

As then Cardinal Ratzinger, just before entering the conclave which would elect him Pope, said:

“Today, having a clear faith based on the Creed of the Church is often labeled as fundamentalism. Whereas relativism, that is, letting oneself be “tossed here and there, carried about by every wind of doctrine”, seems the only attitude that can cope with modern times. We are building a dictatorship of relativism that does not recognize anything as definitive and whose ultimate goal consists solely of one’s own ego and desires.”

The Church professes what is always and everywhere true, because Jesus is the Truth. Jesus is also the Word. The Word—Logos—is reason. If truth claims are not objective and consistent, then they are not compatible with reason.

So I was not surprised by a recent discussion that my husband and I had with friends who are Catholics. They are lovely, generous, and intelligent. But they are not orthodox Catholics.  We explained what we believe and why we believe it.

At first we were not surprised by their responses. We have heard it a million times before. They knew us when we were not exactly good Catholics. I am sure we have surprised them!

The shocker came when our friends had a rather low opinion on reading or studying the faith or any subject for that manner. Everything comes down to how we choose to interpret, based on our feelings and experience, what we read.  They were a bit dismissive of our large collection of books.

This is not new of course. The comedian Stephan Colbert even coined a word for it Truthiness. View the video here

I have a class tonight, so I will finish this tomorrow.

I am the wife of a Catholic deacon living in Des Moines Iowa. My husband Larry was ordained in 2006. We have two children and five grandchildren.. Our daughter and her family live in Ireland, and our son and his family live in Franklin Massachusetts.
View all posts by Susan Kehoe →
This entry was posted in Catholic, Christianity, Truth, Truthiness, Uncategorized and tagged Catholic teaching, Relativism, Stephan Colbert, truthiness. Bookmark the permalink.

4 Responses to Lost in Truthiness