Only In the Catholic Church

The first place that we lived, over thirteen years ago, when we returned to the US 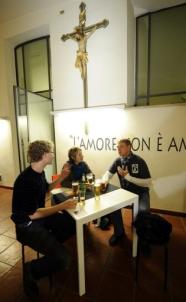 was Guymon Oklahoma. Guymon is a small town in the panhandle of Oklahoma. Catholics make up less than 5% of the population. My husband was the head guy for a manufacturing company in town, so we were known by just about everyone.

Well one evening, my birthday, we were in the only “fancy” restaurant in town.  Two couples from the Chamber of Commerce came by our table to chat. One of the women asked me what I was up to, and I mentioned that I was involved at my Church. Just at that moment the waiter arrived with our adult beverages.

A horrified expression came across her face. Then the light bulb came on. “OOOOOOOOOOOOOOOOH. That’s right”, she said. “You belong to the CATHOLIC Church!

Well a Catholic Pub has just opened up in Rome. In an historic crypt.

The beer is cheap, the waiters are talkative and the music is 1960s Motown — but the new pub that opened its doors this week in a historic crypt in central Rome is not really like any other.

Start with the landlord being a Catholic priest, the religious sayings on the walls and the large crucifix hanging in one of its vaulted rooms.

But not everyone is a fan. Pascal Menged, 27 said:

“It’s okay but I think an Irish pub is nicer than this.”

I am the wife of a Catholic deacon living in Des Moines Iowa. My husband Larry was ordained in 2006. We have two children and five grandchildren.. Our daughter and her family live in Ireland, and our son and his family live in Franklin Massachusetts.
View all posts by Susan Kehoe →
This entry was posted in Catholic Culture. Bookmark the permalink.

2 Responses to Only In the Catholic Church