We Were NOT Ordained 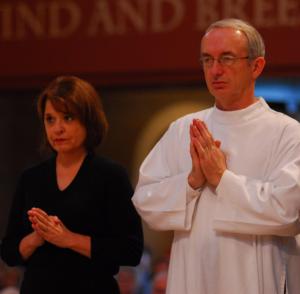 Deacon Larry and "A Deacons wife"

Deacon William T. Ditewig, has an excellent post up at his blog Deacons Today: Dalmatics and Beyond that addresses an issue that has bugged me ever since my husband began Deacon formation (H/T Deacon Greg Kandra) :

“I can still remember how shocked I was.  My wife and I were at a small dinner party with several other deacons and their wives.  We had just moved to the area and we were still getting to know our new colleagues and friends.  While we were chatting and sharing our stories, one of the wives made the comment, “We were ordained in May.”  WE were; not “HE was ordained”; “WE were ordained.”  That took me aback.  I didn’t say anything, of course, but I’ve thought about it ever since.  Of course I knew what she was saying: They had journeyed together throughout the formation process, and both of them had to make firm commitments involving diaconal ministry.  Furthermore, our theology of matrimony, which holds that “two become one flesh” enters into this equation at some point as well.  Still, only the husband had been ordained, albeit with her full participation and support.

As my own experience with the diaconate has grown over the years, including service at the national and international levels, I have heard this kind of comment repeatedly, although not nearly so much as I did in the past.  This expression, “we were ordained” seems to have peaked with those ordained in the late 1970s and early 1980s.  As more than one person has observed, “Even though a couple is married, one spouse may still celebrate a sacrament without that sacrament having effect on the other spouse.”  Consider two unbaptized persons who are married.  Should one of them be baptized, we wouldn’t expect to hear the other spouse say, “WE were baptized.”

Amen Deacon. As he points out the horrifying, to my ears anyway, the “We were ordained” meme  is used for the most part by older Deacons and their wives. They tend to be of the progressive Catholic variety.

The good Deacon also takes apart another expression, which sets my teeth on edge, “Deacon Couples”.

“Another expression that still has traction is that of “deacon couples”; we often hear this, especially in terms of  social or church events: “All deacon couples are invited.”  Again, the intent here is clear enough.  Deacons and their spouses (for those who are married, of course) are invited.  However, the precision of the expression is lacking.  Only one of the two is an ordained deacon, and that does not extend to the couple.  I made a career in the Navy, and retired as a Commander.  We would not be invited to things as a “Commander couple” or even as an “officer couple.”  The same precision applies here.  So, most places have stopped using that expression in favor of something more precise.”

Sigh. We still hear “Deacon Couple” in these parts. Heh. Deacon Detewig and his wife were not a Commander Couple when he  was in the Navy. Exactly.

Where we part company is his suggestion that we shouldn’t use the expression deacons wife. Hey I am “A Deacon’s wife”.

Some wives think that it takes away from their identity. Not me.

Just call me a Deacon’s wife. I know who I am. It does not demean or threaten me in any way. When my husband and I married in 1972 it was fashionable for women to retain their maiden names or to combine last names.

This was in the feminist bra burning day. It was not for me. And this was back in my eating barbed wire for breakfast days.

I have been asked why I call this blog “A Deacon’s wife”. Well it came from when my husband first began his Deacon ministry at Christ the King. Often parishioners could not remember our names. So they would just say “hi Deacon”.  Some of them would also say “good morning deacon’s wife.”

I thought it was cute. No one who has ever spent two minutes with me would dare to think that I am the door mat type.

Besides, I am still trying to figure out what God is asking of me as a deacon’s wife

I am the wife of a Catholic deacon living in Des Moines Iowa. My husband Larry was ordained in 2006. We have two children and five grandchildren.. Our daughter and her family live in Ireland, and our son and his family live in Franklin Massachusetts.
View all posts by Susan Kehoe →
This entry was posted in Deaconate and tagged Catholic Church, Deacon wives. Bookmark the permalink.

14 Responses to We Were NOT Ordained