I wrote about perceived anti Catholic tactics by the democrats in Minnesota here. In an update I tried to give them the benefit of the doubt. Today, however, I found a picture of their latest postcard campaign on the web site for the Archdiocese of St. Paul and Minneapolis. It uses a picture of what is clearly a Catholic altar.

The spokesperson for the DFL tries to explain

“When asked if the mailing’s creators considered how offensive the images could be to Catholics and other faith groups and if an apology might be coming from the DFL Party, McFarland said, “Everything that I had to say, I said in the statement I sent. I don’t have anything to add to that.”

McFarland sent the following e-mail to The Catholic Spirit:

“The ad is part of a two-piece mailing that highlights and criticizes the policy views of Dan Hall, a preacher who is the Republican candidate for the Minnesota Senate. I enclose both sides of both pieces. I understand that some Republican bloggers have taken one image from the first piece, and claimed that the mail is somehow anti-Catholic. But the text explicitly criticizes Preacher Hall for distancing himself from policy views that have been taken by the Catholic Archdiocese, by the Lutheran Synod, and other leaders in Minnesota’s faith community. Dan Hall is willing to enlist God and religion in his campaign when it helps him — but in fact, his views hurt the poorest and sickest among us, and this mailing holds him accountable for those views.”

Ok. But if is only directed at Dan Hall, who is a chaplain of a non denominational Church, why use images that are specifically Catholic. Is it a coincidence that the Bishops of Minnesota mailed DVD’s in defense of marriage as between one man and one woman, to all registered Catholics?

Take a look at the picture and let me know what you think: 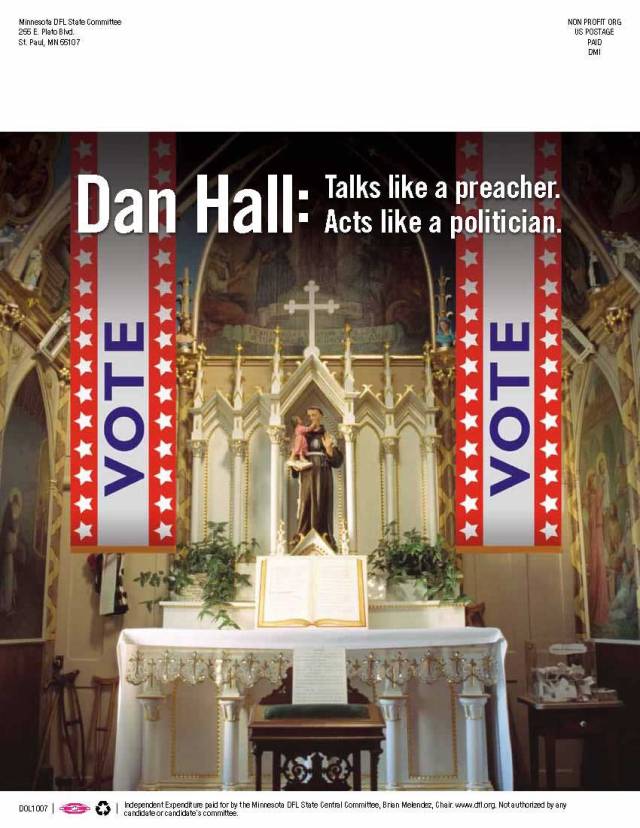 I am the wife of a Catholic deacon living in Des Moines Iowa. My husband Larry was ordained in 2006. We have two children and five grandchildren.. Our daughter and her family live in Ireland, and our son and his family live in Franklin Massachusetts.
View all posts by Susan Kehoe →
This entry was posted in Church and the Public Square. Bookmark the permalink.