UPDATE: Scroll to the end.

The Grey Lady is at it again. Breathlessly distorting the facts. But apologist 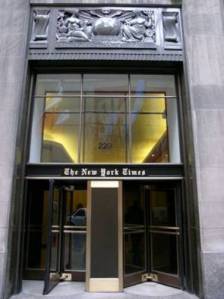 extraordinaire, Jimmy Akin in his National Catholic Register article, Vatican warned Bishops not to Report Child Abuse, has the truth.

That’s the sensationalistic headline of this story in the New York Times. As usual, it’s by Laurie Goodstein, and as usual she makes significant errors in her reporting that make the story more sensationalistic in a way that (just coincidentally) paints the Holy See in an unfavorable light. (So . . . what’s up with that, Laurie? You’ve been on the beat long enough that you should be better informed on these matters.)

As with previous stories of the same nature, this one involves a document from back in the 1990s that has now come to the attention of the press. It was a letter written by the Apostolic Nuncio of Ireland (that’s basically the Holy See’s ambassador to Ireland, though he also has a liaising role with the local bishops). In the letter the Nuncio—then Luciano Storero—communicated a message to the Irish bishops from the Congregation for Clergy concerning a document that the Irish bishops had drafted on child sexual abuse.

This letter was immediately hailed by groups like SNAP as the “smoking gun” they’ve been waiting for, showing that the Holy See took part in the cover up of sexual abuse, allowing it to be sued in court, humiliated, and have money extracted from it.

You can read (a tiny, low resolution image of) the letter itself here.

Now let’s walk through it and see how the claims made about it stack up against the document itself . . .

Well what are you waiting for?  Get thou there and start walking!

The Church must be doing something right to merit such creative “journalism”.

UPDATE: I must give credit when it is due. Well. Hell just froze over yet again.  Mollie over at Get Religion, has a great post, A Vatican Smoking Gun on the original NYT report. But she found that the online version of the NYT has made some corrections. The NYT headline is now Vatican Warned Bishops on Abuse policy. It is, indeed, an improvement.

I am the wife of a Catholic deacon living in Des Moines Iowa. My husband Larry was ordained in 2006. We have two children and five grandchildren.. Our daughter and her family live in Ireland, and our son and his family live in Franklin Massachusetts.
View all posts by Susan Kehoe →
This entry was posted in Catholic Church Scandals, Media and tagged media vs Catholic Church, New York Tmes. Bookmark the permalink.