Pope to allow ordination of German man married to a nun 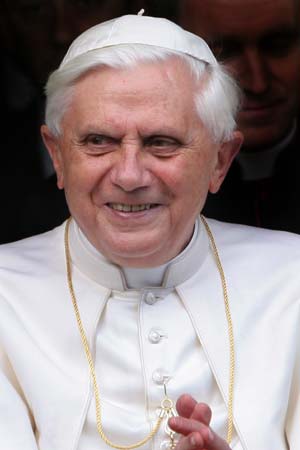 “BERLIN — In a rare move that needed the pope’s approval, a Lutheran convert is being ordained as a Catholic priest in Germany and is being allowed to remain married to his wife – who has already become a nun.

The Cologne archdiocese said 61-year-old Harm Klueting is to be ordained as a Catholic priest Tuesday. Pope Benedict XVI gave him a special permission to remain married to his wife Edeltraut Klueting, who became a Catholic Carmelite nun in 2004. The couple has two grown children.

Klueting and his wife were both Lutherans when they married in 1977 and both converted to Catholicism several years ago.

The Rev. Federico Lombardi, the Vatican’s chief spokesman, says the exception is rare but there have been similar cases.”

Well this wouldn’t be such a headline grabber if it wasn’t for the “married to a nun” addition.  The Church has been ordaining married men from the Anglican and Lutheran traditions for years.

But I am almost 100% certain that Mrs. Klueting isn’t a nun. Since she was already married when she became a Carmelite, she probably belongs to the secular Third Order.

I could be wrong, but I doubt it.

Just  when I think that journalism can’t get any shoddier, at least when reporting on religion, it does.

I am the wife of a Catholic deacon living in Des Moines Iowa. My husband Larry was ordained in 2006. We have two children and five grandchildren.. Our daughter and her family live in Ireland, and our son and his family live in Franklin Massachusetts.
View all posts by Susan Kehoe →
This entry was posted in Catholic Church, Clergy, Media, Uncategorized and tagged Carmelite, Nuns, Priest, Third Order. Bookmark the permalink.