Are You Ready for Judgement Day? 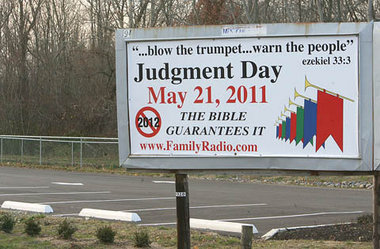 Over at the Catholic Lane, Jeffery has a post up on the subject:

This “predicting of the end of the world” and interpreting Scriptures in a very clever way to support some prediction of the date of the return of Jesus is all too familiar to me.  I was raised in another apocalyptic cult known today as the Jehovah’s Witnesses.  This group promotes a similar “cleverly invented story” which continues to deceive millions of people and has destroyed the faith of countless others.

Russell and Camping: The Great Decoders of the Bible

One characteristic that is common among individuals who like to make predictions regarding the end of the world or the return of Christ is that these individuals believe that there is some secret knowledge contained in Holy Scripture that only they can decode for the world. Read more here.

A song to help you get ready for the judgement day:

I am the wife of a Catholic deacon living in Des Moines Iowa. My husband Larry was ordained in 2006. We have two children and five grandchildren.. Our daughter and her family live in Ireland, and our son and his family live in Franklin Massachusetts.
View all posts by Susan Kehoe →
This entry was posted in Four Last Things and tagged End times, Final judgement, Rapture. Bookmark the permalink.

1 Response to Are You Ready for Judgement Day?