This was in yesterday’s Des Moines Register: 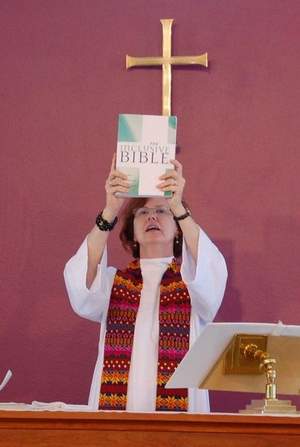 She is a priest in the Roman Catholic tradition, but the church forbids female clergy, so she has been excommunicated from the church.

Kusner said there was another consequence to her ordination: “I had never planned to grow a church,” she said.

A year later, the 51-year-old Iowa City woman is doing just that. Kusner, a married mother of four, marked the first anniversary after her controversial ordination by leading Mass for about 20 people Sunday afternoon in Coralville.

Okay this article is better than most.  At least it acknowledges that she has been automatically excommunicated from the REAL Catholic Church.

The article also quotes a spokesperson in the women priest’s movement claiming that these fake ordinations of women are legitimate because they follow apostolic succession. Umm. No.

The Catechism of the Catholic Church is quite clear:

1577 “Only a baptized man (vir) validly receives sacred ordination.” 66 The Lord Jesus chose men (viri) to form the college of the twelve apostles, and the apostles did the same when they chose collaborators to succeed them in their ministry. 67 The college of bishops, with whom the priests are united in the priesthood, makes the college of the twelve an ever-present and ever-active reality until Christ’s return. The Church recognizes herself to be bound by this choice made by the Lord himself. For this reason the ordination of women is not possible.

Case closed. Oh and did I mention that she is gay and living with a partner?  Sigh.

The headline makes the claim that Iowa Catholics are ready for women priests. If that is true, then Catholics must be flocking to this church in the roman catholic tradition. Oh wait her core flock number is 25-30 people.

At the age of 51 she is  probably the youngest member of her made up church.  Women Priests. A real growing (old) movement.

But we really should be praying for these misguided people.  The poor Catechesis of the past 40 years as lead so many souls astray. Lord have mercy.

I am the wife of a Catholic deacon living in Des Moines Iowa. My husband Larry was ordained in 2006. We have two children and five grandchildren.. Our daughter and her family live in Ireland, and our son and his family live in Franklin Massachusetts.
View all posts by Susan Kehoe →
This entry was posted in Catholic Church, Clergy, Heresey and Dissent and tagged Catholic priests, excomunication, Iowa. Bookmark the permalink.