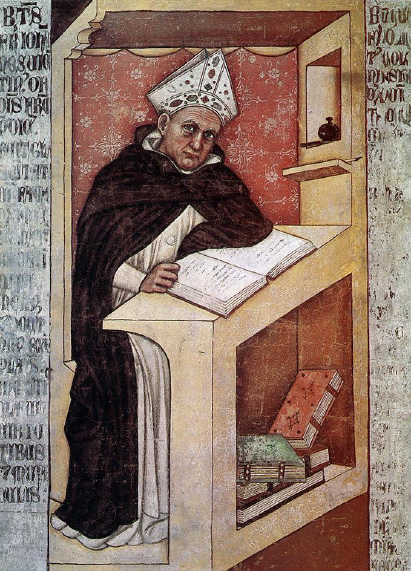 Excerpt from the New Theological Movement:

“It is a very common mistake, even in Catholic academia, to give the title of Doctor Universalisto St. Thomas Aquinas – I have seen this not only among the laity but also among the clergy and religious, even in quasi-professional settings.

Certainly, the root of this confusion lies in the fact that St. Thomas is the Doctor Communis (Common Doctor) and is also commonly called the “Universal Doctor of the Church” . Still it is good to note that St. Thomas is called the Common Doctor insofar as he is the teacher of all and master of every aspect of theology, while St. Albert is called the Universal Doctor insofar as he wrote on every topic both in theology and philosophy, as well as in the natural sciences.
St. Albert the Great is the Doctor Universalis, as the theologian who united faith and reason in an age when the philosophy and science of Christian Europe was in the midst of great development (on account, especially, of the advent of new texts from Arabia). While St. Albert is certainly a great theologian and doctor of the Church, he was also the pre-eminent scientist of his age – his de animalibus is well worth the read for any who are interested in medieval zoology.

It was his eminent learning in every subject which has gained St. Albert the title of Doctor Universalis – “Doctor of all things”.” Read the whole post here.

I am the wife of a Catholic deacon living in Des Moines Iowa. My husband Larry was ordained in 2006. We have two children and five grandchildren.. Our daughter and her family live in Ireland, and our son and his family live in Franklin Massachusetts.
View all posts by Susan Kehoe →
This entry was posted in Saints, Science, Theology and tagged St. Albert the Great; Doctors of the Catholic Church. Bookmark the permalink.