Catholics in the Public Square 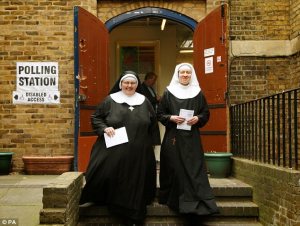 political party before their Catholic faith.

While I believe that our faith should inform our political choices, politics should not inform our faith.  In the increasingly divided country that we live in, Christians are too often influenced by the tribal party that they identify with instead of the Gospel of Jesus Christ.

Yes the Church does encourage us to vote. Sometimes the only choice is none of the above.

Deacon Keith Fournier lays it all out for you so that I don’t have to.  He thinks that ‘Morally Coherent’ Catholics Can Change this Nation. H/T Thomas Peters.

Catholics are not one more “interest group” which can be polled, pandered to and bought. Our social obligation is to promote the true common good, not just use the slogan to sound “catholic” as happened in the last political cycle. We need to promote the truth as taught by the Church no matter what it is labeled in the political parlance of the hour. Our political participation must be committed to human life and dignity, marriage and the family, authentic human freedom, and solidarity.

Well I identify as simply Catholic. I am a political agnostic. My participation   in the public square is, for the most part, limited to voting while holding my nose.  But I am an informed observer of the political scene.

Deacon Fournier’s call for Catholics to be morally coherent or consistent is a wise and noble one. But moral consistency and/or intellectual consistency is just not very common. Consistency requires logical reasoning. When our moral beliefs are based on sentiment and feelings, the only outcome is moral relativism. Moral relativism is inconsistent. It is the doctrine of whatever.

I am the wife of a Catholic deacon living in Des Moines Iowa. My husband Larry was ordained in 2006. We have two children and five grandchildren.. Our daughter and her family live in Ireland, and our son and his family live in Franklin Massachusetts.
View all posts by Susan Kehoe →
This entry was posted in Church and the Public Square, Politics and tagged Catholic vote, Moral relativism, morality, Politics. Bookmark the permalink.