Dissent in the Twilight Zone 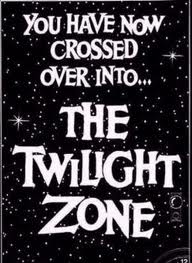 sex   “marriage”.  In the meantime the US Bishops have just issued the following statement concerning two Creighton University professors :

WASHINGTON (September 22, 2010)—The United States Conference of Catholic Bishops’ (USCCB) Committee on Doctrine has issued a statement in response to a request from the former and current archbishops of Omaha to review the content of a book by Creighton University professors Todd Salzman and Michael Lawler, The Sexual Person: Toward a Renewed Catholic Anthropology. In the statement, “Inadequacies in the Theological Methodology and Conclusions of The Sexual Person: Toward a Renewed Catholic Anthropology,” the Committee asserts that the authors of The Sexual Person “base their arguments on a methodology that marks a radical departure from the Catholic theological tradition” and “reach a whole range of conclusions that are contrary to Catholic teaching.” Read more here ; the entire document is here .

Sigh. But it is not a big surprise. This is not the first time that these fellows have been cited for their theological musings. Yet they persist, and yet another Catholic University shrugs it’s collective shoulders while yawning.

Deacon and I had the misfortune of being a captured participant in Michael Lawler’s class during his deacon formation (Creighton is in Omaha Nebraska about a two hour drive).  To my husband’s dismay, Lawler hails from Ireland. St. Patrick phone home.

I don’t want to be uncharitable, but let’s just say that Mr. Lawler is not as charming or gentile as my husband.  Anyway Mr. Lawler distorted so many Church teachings and miss- presented so many Church documents, that I just sat there with my jaw permanently glued to the floor.

He was not particularly happy to learn that the fellow Irishman in the room and his wife, were well versed in all things Catholic.  He certainly was not interested in a challenging discussion and exchange of ideas which is the usual defense of dissident professors at Catholic Universities when they umm dissent.  Gee where was all that luv and tolerance so touted by the progressives. The Bishop’s document really does a good job of taking apart the arguments against the Church’s stance on all things sexual.  The two professors really entered into the twilight zone. Their theology is so contrary to the consistent teaching of the Church that it can only exist in a parallel universe.  Apparently Lawler and Salzman believe, that contrary to Christ’s promise that the Church would not err in matters of faith and morals, that the Church is flat out wrong. The Bishops point out that:

“The ambitions of the authors of The Sexual Person are not small. The Sexual Person does not offer minor revisions to a few points of Catholic sexual ethics. Instead, the authors insist that the moral theology of the Catholic tradition dealing with sexual matters is now as a whole obsolete and inadequate and that it must be re-founded on a different basis. Consequently, they argue that the teaching of the Magisterium is based on this flawed “traditional theology” and must likewise be substantially changed.”

Wow. It takes an awful lot of hubris for two professors in a mid sized University to maintain such a stance.

Now I am the last person to say that any baptized person should leave Mother Church.  But I have to wonder why those who dissent so drastically from the teaching authority of the Church stay.

We really should pray for these two lost souls, and the state of our not so Catholic Universities.

I am the wife of a Catholic deacon living in Des Moines Iowa. My husband Larry was ordained in 2006. We have two children and five grandchildren.. Our daughter and her family live in Ireland, and our son and his family live in Franklin Massachusetts.
View all posts by Susan Kehoe →
This entry was posted in Catholic Moral Teaching, Heresey and Dissent, The Catholic Church and tagged Catholic dissedents, United States Conference of Catholic Bishops. Bookmark the permalink.

2 Responses to Dissent in the Twilight Zone