If God is all good and all loving and all merciful, why does he allow suffering 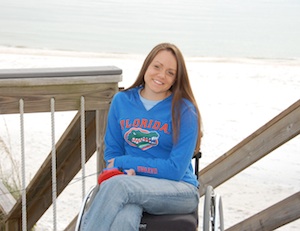 and evil? This question is often asked in the RCIA. It is not easy to answer people who are discerning Catholicism especially for those who are questioning the existence of God.

Pointing to the cross and explaining free will sometimes fail to convince.

So I am always praying for wisdom and looking for answers in books and on Catholic blogs. Over at Pathos, Chelsea Zimmerman, looks at suffering in Refusing to Suffer Is Refusing to Live. Chelsea is a young woman who knows something about suffering; she is paralyzed from the neck down (H/ T CMR):

“After several years of rigorously defending and promoting the dignity and sanctity of all human life, it has been my observation that one of the supporting pillars of the culture of death (those kneejerk proponents of abortion, euthanasia, assisted suicide, cloning/ESCR) is a desire to avoid or alleviate human suffering at all cost. A woman with an unwanted pregnancy doesn’t want the “burden” of a child; sick people want cures for what ails them or they want to be put out of their misery altogether; what good is imperfection, anyway? We see suffering, more than evil, as the worst thing there is, so much so that we will commit evil acts in an attempt to avoid it, often under the pretext of mercy and compassion.

But a culture that expects life to be lived to its fullness must be able to embrace and make peace with—even find joy in—the normalcy of human suffering.

A few years ago, this expressed sentiment prompted a fellow blogger to ask: why?

I have to admit, she had me stumped. Though I had come up with the connection between the culture of death and society’s disdain for suffering, I couldn’t exactly explain why the two were so connected. Then, nearly two years later, I came across a section in Fr. Jacques Philippe’s book Interior Freedom entitled “Refusing to Suffer Means Refusing to Live”:

Suffering should be remedied whenever possible, but it is a part of life, and attempting to get rid of it completely means suppressing life, refusing to live, and ultimately rejecting the beauty and goodness that life can bring us.

Why does hatred of suffering lead to decreased respect for human life? Because refusing to suffer is refusing the totality of living. It is a rejection of life itself.”

“When I was 17 and the doctors told me that I would never walk again, I knew I had two choices. I could wallow in self-pity and sit around moping about my fate and refusing to face life in a wheelchair. Or I could accept the diagnosis, get out of bed, and confront the challenges that come with a disability head on.

I’m not going to lie. The past eleven years have not been easy.

But that doesn’t mean they have been “too hard” to take, or that joy has eluded me. I’m still a human being, I’m still alive, and my life still has meaning and infinite value despite my challenges and limitations. What’s more, experiencing adversity has provided me with an elite (and extensive) education in the practical living-out of those valuable virtues: humility, patience, courage, and perseverance.

A life without suffering or conflict is one of heaven, not earth. On earth, even Jesus, the God-man, suffered. So did his beloved mother.” Read more here.

It is only in recent years that I have been able to accept suffering with any grace. This exceptional young women figured it out at 17. Check out her blog, Reflections of a Paralytic.

I am the wife of a Catholic deacon living in Des Moines Iowa. My husband Larry was ordained in 2006. We have two children and five grandchildren.. Our daughter and her family live in Ireland, and our son and his family live in Franklin Massachusetts.
View all posts by Susan Kehoe →
This entry was posted in Suffering and tagged life, suffering. Bookmark the permalink.

1 Response to Refusing to suffer is refusing to live.