Because there is great rejoicing in heaven when one sinner repents and turns back to the Lord.

But why do I ask?

Well a commentator on this post on the National Catholic Register proposed a throw down.

“What does the sacrament of Reconciliation mean to you? Personally? Not the definition from the Catechism.”

Well I am not one to blink away from a challenge. But I don’t have to reinvent the wheel. I answered it in this older post.

Chapter 15 of the Gospel of Luke consists of three Parables: The parable of the Lost 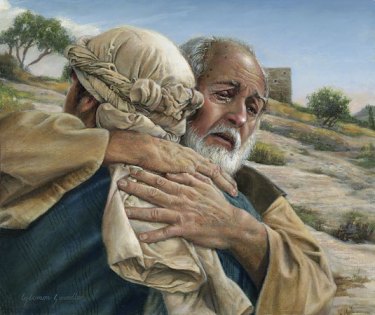 Sheep, the lost Coin and the lost Son.   The “moral” of these stories is that God rejoices when sinners repent.  All of Heaven rejoices!

God’s mercy for sinners goes beyond our ability to understand. Many people would say “how dumb to leave a whole flock of sheep to go after one; what a waste of time and energy for a woman to search her house for one measly coin.  Gee what a gullible Father to take back such a useless son—and throw him a party!  The younger son wasted his inheritance and turned his back on God and his people to live with pagans!   He spent all of the father’s hard earned money on wine, woman, and gambling. Certainly most parents today would take such a son back—but throw him a huge party. Are you kidding?

Did you catch the most amazing verse in the parable of the lost son? “While he was still a long way off, his father caught sight of him, and he was filled with compassion.  The father ran to his son and he embraced and kissed him.” Wow. The father was watching for his son’s return.

Now that would be very unusual for a Jewish Father in this situation.  The son had demanded his inheritance while his father was alive. This son had freely decided to break his relationship with his father—with his family. Even worse he freely decided to break God’s law. He chose to exile himself. When he had squandered his inheritance he took a job tending pigs. This was against God’s ordinances. It made him unclean—outside the law. He was a big time sinner. This young man had broken the Covenant with God. He had severed his relationship with God and with his earthly father.

A Jewish father would have not have been looking for his son’s return. The son, by choosing to go against God, had cut himself off permanently from his father and his family. This son was dead to his family.

Yet this Father was watching for his return. When he saw him way out in the distance, the father ran to meet his son—not a very dignified thing for a Jewish Patriarch of that time to do.  It was such an unbelievable thing to do that the elder son couldn’t believe it, and he refused to acknowledge the lost son as his brother.  He refuses to call him brother despite his father’s pleading. He calls him (to his father) Your Son. Not my brother.

Of course, the Father in the parable is God. He wants us to repent—turn back from sin—to go through a conversion of heart. He is watching for us to return to God’s family. When we do there is great rejoicing in heaven. God wants us to turn away from sin and enter into a new life with him. A life lived in the trinity of God the Father, Son, and Holy Spirit. That is where our joy is. Continue reading …..

I am the wife of a Catholic deacon living in Des Moines Iowa. My husband Larry was ordained in 2006. We have two children and five grandchildren.. Our daughter and her family live in Ireland, and our son and his family live in Franklin Massachusetts.
View all posts by Susan Kehoe →
This entry was posted in Catholic Church, Sacraments and tagged Confession in the Catholic Church. Bookmark the permalink.