Turning To The Lord Together

Fr. Richard Simon, AKA Rev. Know it all, has a thought provoking reflection on the Mass 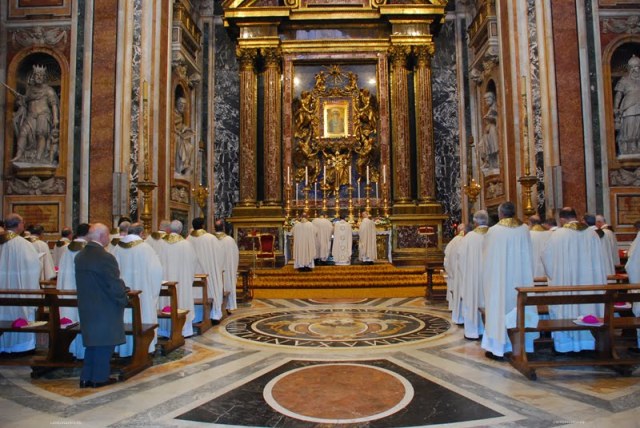 after facing away from the congregation during specific parts of one Mass. Now he wishes that he had not, but not for the reason you might think. And it wasn’t because some people were angry with him.

“I, however, wish I had not said Mass facing away from the congregation, and not because of the anger directed at me. I am a Catholic priest. I am used to people being angry with me. I wish I had not said Mass in what I believe to be the posture assumed by the Fathers of the Second Vatican Council, because it was one of the most beautiful experiences of my priestly life. You cannot imagine what it was like to say words like “we” and “our Father” and “us” while standing at the head of a congregation that was turned together in a physical expression of unity. No matter how one might argue to the contrary, it is impossible to say “we” while looking at 500 people and not be speaking to them.

The Mass is a prayer addressed to the Father, and despite our best intentions, we clergy address it to the congregation at whom we are looking. You cannot help it. The human face is a powerful thing. Last Saturday night I realized for the first time that I was part of a family of faith directed toward the same heavenly Father. I felt as if I was part of a church at prayer. It was not my job. It was my church. I never realized how very lonely it is to say Mass facing the people. I am up there looking at you. I am not part of you. For 13 or 14 minutes. You weren’t looking at me. We were looking at God.”

I really do believe that, as the good Father points out, that the celebrant cannot pray with the people while facing them and talking at them. And certainly, at specific times during the liturgy, it is preferable for the celebrant and the congregation to turn to the Lord. In the same direction.

Oh and I had to laugh at his quip that he “is a Catholic priest. I am used to people being angry with me.” Sadly this is all too true. pastors are confronted, constantly, by people who “get their knickers in a twist far too easily.

I am the wife of a Catholic deacon living in Des Moines Iowa. My husband Larry was ordained in 2006. We have two children and five grandchildren.. Our daughter and her family live in Ireland, and our son and his family live in Franklin Massachusetts.
View all posts by Susan Kehoe →
This entry was posted in Echarist and tagged ad Orientem, Catholic Mass, Liturgy. Bookmark the permalink.