Deacon Greg has a post up on the possibility:

The mystery centers on a consecrated host that the Rev. John 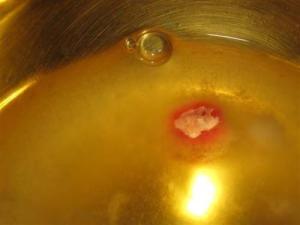 Echert of St. Augustine Church said fell to the floor last month during Holy Communion and turned “blood red” after being placed in a cup filled with water. It has yet to fully dissolve, he said.

“It was notable enough that, clearly, it was some phenomenon and not the ordinary way in which a host would dissolve…that we’re familiar with,” Echert said. Continue reading….

While I believe in miracles, I tend to be a skeptic. The Eponymus Flower has more information including a possible scientific explanation.

I am the wife of a Catholic deacon living in Des Moines Iowa. My husband Larry was ordained in 2006. We have two children and five grandchildren.. Our daughter and her family live in Ireland, and our son and his family live in Franklin Massachusetts.
View all posts by Susan Kehoe →
This entry was posted in Catholic, Eucharist, Miracles and tagged Eucharistic Miracles. Bookmark the permalink.